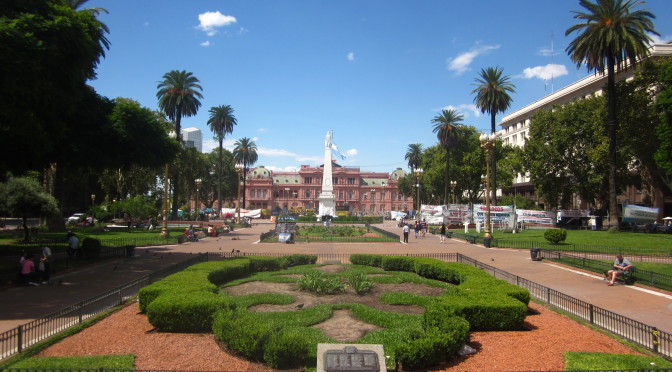 Language. First of all, Buenos Aires is also known as Baires, which is way cooler and makes us feel almost native-like already. The adjective you use to refer to people and things from Buenos Aires is porteño. The variety of Spanish spoken here in Argentina is slightly different from what we’re used to in Europe – slower and more relaxed, which we wholeheartedly approve of. What’s more, the pronunciation of the double ‘l’ and of ‘y’ followed by a vowel is very similar to that of the letter ‘j’ in French or ‘sc’ in Italian, depending on who’s speaking. For example, the sentence ‘I am from Sevilla and I spean Spanish’ sounds more or less like ‘Jo soy de Sevija y hablo castejano’. ‘Okay’ is dale, and a very common expression is viste?, meaning ‘understood?’. END_OF_DOCUMENT_TOKEN_TO_BE_REPLACED 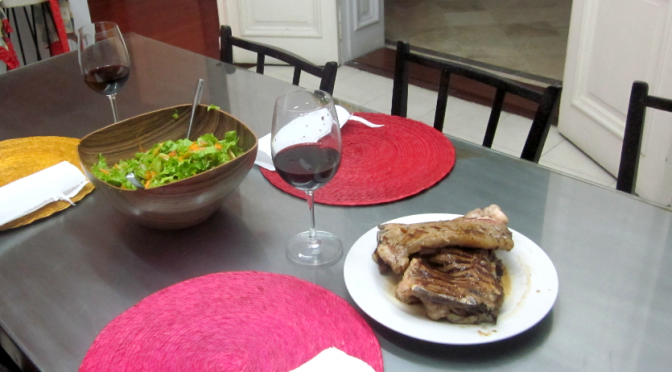 Here’s our first cooking interview, with Andrés Ruggeri. Andrés is a lecturer at the Facultad Abierta in Buenos Aires and is particularly interested in recovered factories. At first, he though we were going to be the ones cooking for him. When he found out it was the other way around, he suggested a dish that is supposed to be ‘básico pero muy Argentino’: churrascos con ensalada – grilled round steak with salad. END_OF_DOCUMENT_TOKEN_TO_BE_REPLACED 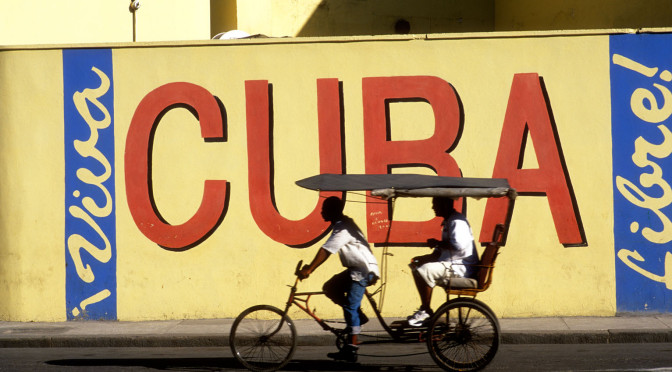 If PTA was our faithful companion before we left, this first leg of our trip has been dotted with hitches. Not too many, to be honest, but pretty major ones.

Lack of organization, on the other hand, is another good friend of ours, and is getting on quite well with Laziness and Procrastination. Lack of organization sticks with you all day long, so that by the end of the day you’re tired, weary, and wondering what the heck you have accomplished. The answer isn’t nothing – it’s less. Less than what we could have done if we’d had a plan, for example. Let’s say that we’ve become pretty familiar with this feeling during these first few days in Buenos Aires. END_OF_DOCUMENT_TOKEN_TO_BE_REPLACED

It’s a journey, meaning it’s a lot of things rolled up together. Research, first of all, inspired by an observation on which we’d like to investigate some more.

These are times of economic crisis, to which Europe doesn’t seem to have a solution. Meanwhile, in Latin America, indigenous people and farmers are joining forces against multinational corporations – and winning their battles; entire communities are going back to bartering or using alternative currencies; laws are being passed that allow workers to reoccupy and manage bankrupt factories themselves; former guerrilla presidents are criticizing communism and legalizing marijuana… it’s stuff from another planet! But maybe it could teach something to those of us who live in a continent where governments – choked off by the crisis and by budget constraints – still think that cutting social expenditure and privatizing common goods is the answer.

And while the crisis over here deepens, on the other side of the ocean they’re talking about buen vivir and making solidarity the fulcrum of the economic sphere, they’re experimenting and they may be laying the foundations for something different from the mainstream model, whose contradictions are becoming more and more apparent.

Capitalism hit Latin America particularly hard, making it imperative to look for alternatives – a search that fuelled both practical attempts and theoretical research. What’s more, the case of Latin American proves that – on a political level – this is not just a residual utopia, but it can be a winning vision. There may be a lot we can learn from that. It may be nice to open a dialogue, to find out if what’s working over there might work over here too, to identify its strengths and weaknesses.

We would like to bring together all the stories we will be told, in order to establish links and promote contamination. We will do it through a journey which will begin in March in Argentina and unfold through Chile, Uruguay, Brazil, Bolivia, Peru, Ecuador, all the way up to Mexico.

It will be a journey full of listening, curiosity, conviviality and sharing. We will come face to face with scholars of solidarity economy, experiences, movements. We will chat of possible worlds, and – to make things more interesting and more complicated – we will suggest doing so in front of the stove, cooking. And we will share the recipes with you.

There are going to be many challenges, starting with changing our lifestyle, getting on a car that will be our home for the next year and facing the roads of South America (or the lack thereof). Learning Spanish, for real. Leaving behind our jobs, our lives, our friends to discover what’s on the other side.
We don’t know what we will find, we don’t know if the answers are going to be general or personal, but there’s one thing we are sure about: we want to share them with whoever reads this blog.