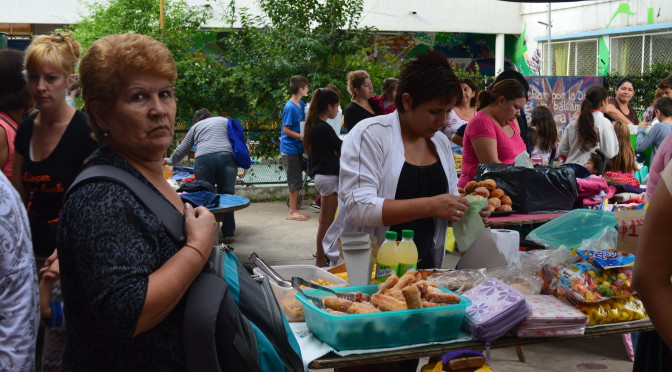 Two of the things ‘from another world’ that happened in Argentina are the extensive experimentation with bartering and the creation of social currencies in the mid 90s – just another facet of the complex galaxy that is solidarity economy. A few weeks ago, we talked about it with Ricardo Orzi, lecturer at the University of Buenos Aires and curator of the book “La moneda social como lazo social (‘The Social Currency as Social Bond’), which explores the phenomenon of social currencies – with a special focus on the most recent or longer-lasting instances – and contains some interesting reflections on the origin and diffusion of currencies.

What is a social currency?

I would define it as an agreement between members of a community on a payment method. It is social because of its local roots and because its objectives are the circulation and exchange of goods, as well as the development of the community itself. Social currencies, moreover, remove the barrier between production and consumption: everybody produces, exchanges and consumes, becoming a prosumer.

How were social currencies born in Argentina?

The popularity of bartering, or treque in Spanish, began with the economic crisis in 1995, during a period of massive unemployment. Social currencies are a non-cyclic phenomenon, as they often appear in times of crisis. Markets started to pop up where people exchanged every kind of goods, and soon the need arose to create currencies to facilitate those exchanges. Three extensive networks for treque were created, which allowed 1,500,000 households to support themselves until 2003, when social currencies were abandoned.

So their emergence is linked to necessity rather than ideology…

Yes. It’s typical of Latin America, where necessity is the driving force, while critical reflection and political action follow at a later stage.

What are the reasons behind the decline of treque?

In 2001, when the crisis deepened, there was a sudden and significant increase in market size. Certain phenomena became difficult to control – the increase in economic activities, for example, demands the emission of more currency, but in some cases this generates inflation. Then there is the issue of counterfeiting. All of this undermines public trust in social currencies, and when these problems are not handled, social currencies are abandoned.

And to think I was convinced they had been abandoned because the economic crisis was over! It’s the other way around…

Yes, we were unable to handle market expansion and to preserve the social character of those currencies. Trust is paramount for the survival of currencies: without trust, they’re nothing but slips of paper. As a matter of fact, the social currencies that were able to control such phenomena survived. And we’re studying them to prove that they’re not necessarily connected with a situation of economic crisis, that they’re not doomed to disappear when the crisis ends. Suffice it to say, there are between 4,000 and 5,000 instances worldwide of local exchange not based on official currencies.

Interesting! And what is the connection between social currencies and capitalist economy?

Their very existence proves that economy is mixed. In the same system, different logics can coexist: as stated by Polanyi, the relation between economy and society can be ruled by market exchange, redistribution and reciprocity. These three factors coexist, but usually one of them prevails over the other two. I think we are going through a period of transition from capitalism to a new structure where reciprocity and solidarity exchange will play a bigger role. But transitions take a long time – we must be aware of it and not get disheartened. The transition from the feudal system to capitalism lasted several centuries!

What about the relation between social and official currencies?

It proves that currency is neutral. According to neoclassical economics, currencies were created as a means of exchange to overcome the problems posed by bartering. Anthropologists the likes of Strauss, Malinowski and Maus, however, demonstrated that currency existed alongside bartering – it had a social function, linked with social standing rather than actual exchange. Neoclassical theories attribute several characteristics to currency: it is created by a national authority, it tends to be accumulated, in a perspective of growth. Social currencies prove than currency can be created by the people and infused with other values. As long as the use of social currency is limited to a small area, it does not represent a threat for the state. At the same time, however, it has the potential to destroy capitalist structures. I believe that social currency is essential in the transition toward a different economy.

This is an excerpt from our three-hour chat with Orzi. We have learned a bit more on social currencies, added two books to our baggage (both cultural and physical), went to bed a little more hopeful and promised ourselves to go back to the topic soon.

One thought on “Another currency is possible: a chat with Ricardo Orzi”