Language. First of all, Buenos Aires is also known as Baires, which is way cooler and makes us feel almost native-like already. The adjective you use to refer to people and things from Buenos Aires is porteño. The variety of Spanish spoken here in Argentina is slightly different from what we’re used to in Europe – slower and more relaxed, which we wholeheartedly approve of. What’s more, the pronunciation of the double ‘l’ and of ‘y’ followed by a vowel is very similar to that of the letter ‘j’ in French or ‘sc’ in Italian, depending on who’s speaking. For example, the sentence ‘I am from Sevilla and I spean Spanish’ sounds more or less like ‘Jo soy de Sevija y hablo castejano’. ‘Okay’ is dale, and a very common expression is viste?, meaning ‘understood?’.

Streets and cuadras. Baires is huge: roads often have something like 8 lanes and street numbers go up to 5,000 – otherwise, where’s the 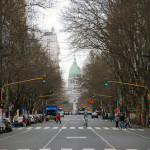 fun? The numbers in Avenida Rivadavia, for example, get well into the 14,000s. Numbering, however, is pretty random: it can jump from 1,100 to 1,300 and nobody will even bat an eye. Numbers start from Plaza del Congreso and increase from there. Distances in Buenos Aires are measured in cuadras. A cuadra is a block, but it’s not uncommon for natives to tell you that something is 25 cuadras away – which would require more than a passing familiarity with the urban geography of Buenos Aires. We spent days wondering about this, coming up with the whackiest theories. Then, we decided to ask. And we found out that no, when people give you directions they don’t really know the exact number of blocks, they just assume a cuadra is more or less 100 meters. It was disappointing and reassuring at the same time… 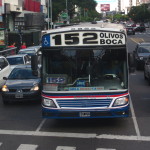 When your destination is several cuadras away, you can take a taxi, the colectivo (known to the rest of the world as ‘the bus’) or the subte – that is, the subway. The taxi is very cheap and has few downsides: the only one is sometimes the drivers’ driving, as they are kind of nonchalant about overtaking on the right and zig-zagging in traffic.

What’s more, red lights appear to be a matter of opinion. After a while, though, you understand it’s a simple matter of survival in the urban jungle. Bus drivers are not much more prudent – quite the opposite. The rule is that the largest one wins, so buses have the advantage over many other vehicles… and are not afraid to use it. Pedestrians are, of course, at the bottom of the food chain, and live in a constant state of alert. 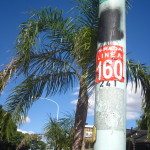 To get the bus or the metro you can buy a rechargeable travel card ­– the subte – which is definitely the cheapest way to travel. If you manage to find the stop, that is. Here’s the pic of a stop in front of Parque de la Memoria – by the way, three different buses stop there, but sticking all of three stickers on the post was apparently too big of an effort. Once you’ve found your stop, buses are a great means of transport, as service is frequent even at night.

Temperatures in the subway can range from -15 °C to +45 °C, according to unknown criteria, and trains are populated by quirky gentlemen trying to sell all kinds of stuff – from magnifying glasses to sewing kits, from cartoon stickers to fabulous steel pens. They stop by, they leave their merchandise, they deliver a theatrical monologue on why you won’t be able to live without this or that item, then usually they pick it back up and move on to another carriage. In addition to peddlers, there are also a lot of musicians, often quite talented.

It’s true: vegetarians can’t survive here, or they simply don’t have any kind of social life. We, at any rate, have been eating almost exclusively empanadas for the past month, and we have suffered no side effects… yet. But the best thing in Argentina – better than Perito Moreno, than the Andes and the waterfalls, and yes, I am indeed saying this, better than Nutella – is dulce de leche. Which, inexplicably, you can’t find in Italy, despite the recipe only calling for milk and sugar. It’s basically Alpenliebe candy spread, and it has the magic power to fill whoever eats it with joy and happiness. As for the rest, meat: asado, churrascos, chorizo, bife de lomo… weird sandwiches made with corn flour… and meat. Oh! And gnocchi, or ñoquis as they’re called, a legacy from Italian migrants. They are traditionally eaten on payday, the 29th of every month.

Italians drink coffee, Brits drink tea, and Argentinians drink mate. The difference is that you don’t need to go to the coffee shop: it’s 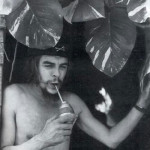 everywhere, even in the streets. ‘Mate’ is the name of both the container and the contents, an infusion of dry leaves of yerba mate whose recipe Spanish settlers borrowed from Guarani traditions. Every Argentinian worth their salt owns a mate – a small, round container often made with a pumpkin – equipped with a metal filter straw called bombilla and a thermos bottle to add hot water to the infusion. Mate doesn’t usually need any sugar and is often drunk with friends, adding boiling water and passing it to each other. It produces a stimulant effect – so much so that when Marco drinks it in the morning, he’s awake, alert and surprised to be.

Porteño culture. People in Baires are incredibly attentive: they ask if you need any help before you even realize you do. When you thank them, they answer ‘no, por favor’, which is beautiful. And they queue. They queue for everything. For the colectivo, to do their grocery 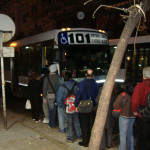 shopping at the market, to buy hot dogs. Patient and trusting, they queue. It’s a concept us Italians have some trouble coming to terms with. They don’t stand on the right on escalators, though, and give way to those who are in a hurry – maybe it’s because nobody’s in a hurry here.

One thought on “IMPRESIONES PORTEÑAS – PART 1”